A teen was allegedly killed by his stepfather after he refused to stay home and shelter in place, police say

It began as a fight over a stay-at-home directive. By the end, a teenage boy was dead.Atlanta police say they responded to a call of a person shot just after 8 p.m. Wednesday. When they arrived, they found 16-year-old De’onte Roberts gravely wounded.He had been shot in the chest during a domestic dispute with his stepfather, 42-year-old Bernie Hargrove, Atlanta Police Department spokesman Steve Avery told CNN. 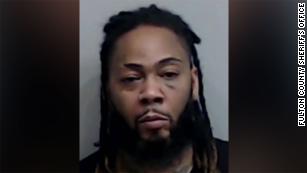 Bernie HargroveRoberts was taken to Grady Memorial Hospital, where he died from his injuries.According to a statement police shared with CNN, the dispute began earlier in the day, when Roberts refused his parents’ order to remain at home and comply with recent shelter-in-place directives, his mother told detectives.When Roberts returned home and kicked in the door to the house, a physical fight began between Roberts and Hargrove, the mother told detectives.Roberts was shot during that altercation, the statement said.Homicide detectives interviewed Hargrove and charged him with felony murder, according to a police statement.Tracy Flanagan, public affairs officer with the Fulton County Sheriff’s Office, told CNN that Hargrove had a first appearance hearing Thursday morning and bond was denied. He is being held in the Fulton County Jail.CNN’s attempts to contact Hargrove’s attorney were unsuccessful.close dialog

Georgia was one of the later states to implement shelter-in-place orders due to the ongoing spread of the coronavirus. Monday, Gov. Brian Kemp announced his plans to allow certain businesses such as fitness centers, bowling alleys and hair salons to reopen on Friday.Fulton County, which includes Atlanta, has recorded 2,436 cases of the virus with 88 deaths as of Thursday, according to the Georgia Department of Public Health.